In my old man’s garage I have a copy – in red vinyl, if I remember rightly - of Pat Travers’ album Live! Go For What You Know, acquired back around 1981.  But for the sake of convenience I recently got hold of a cd copy.  Why?  Well, partly because Pat Travers will soon be touring these shores. And partly because a couple of months back I heard Edinburgh band The Blueswater do a version of the classic blues track ‘Boom Boom – Out Go The Lights’, originally recorded by Chicago blues harp legend Little Walter.  In an otherwise excellent set, as I commented in a 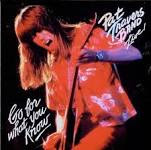 review, this song seemed strangely underpowered.  But afterwards I reflected that this might be because I’m mostly familiar with the track from a version by Pat Travers, captured on the aforesaid live album.

I can’t say that I was ever a Pat Travers aficionado, but back in the mid-Seventies he seemed like a guy very much on the up. From the odd radio show, Whistle Test, and a Sounds compilation album I had picked up on tracks like ‘Statesboro Blues’, ‘Rock’n’Roll Susie’ and ‘You Don’t Love Me’, all of which had a gutsy blues-rock sound and piqued my interest.  So when a summer job a few years later allowed me to go on an album buying splurge, I decided to give Go For What You Know a shot, even though it didn’t feature much material that was familiar to me.
Stylistically, it focuses on straightforward hard rock more than the blues, with a shot of funk thrown in here, as on ‘Gettin’ Betta’ for example.  And there’s some impressive stuff in there, especially the likes of ‘Stevie’, ‘Makin’ Magic’ and ‘Heat In The Street’.  But at the end of Side 1 on the vinyl edition, ‘Boom Boom – Out Go The Lights’ grabbed my attention.
It’s a driving, revved-up blues singalong, with some sizzling guitar from both Travers and his guitar co-conspirator Pat Thrall, with emphatic lyrics matched by the music.  To a 19 year-old living in Scotland, it sounded like an innocent enough scene, the seething boyfriend threatened by a competitor, ready to punch someone’s lights out – I thought.  But a little while back, watching some blues documentary I think, it became apparent that the song reflected the darker reality of urban America, in which the ‘boom boom’ reflected the likelihood of a couple of gunshots aimed at the cheating girlfriend and the ‘other guy’.


There’s a saying, “the past is another country, they do things differently there”.  And the world of cotton picking, shotgun shacks, ghettoes and gun carrying is very different from the life many of us live.
Posted by Iain Cameron at 2:20 PM