Adventures in the South - Clarksdale, Part 1

We were about ten minutes away on Highway 61 when the iPod’s American playlist coughed up the title track of Robert Plant and Jimmy Page’s album ‘Walking Into Clarksdale’.  The song was appropriate not just because of it’s timing, but because in a sense the song was the inspiration for being here in the first place.  When the album came out I had read a feature in which Plant (I’d guess, Page being a less likely interviewee) explained the inspiration for the song.  That article gave a name to the kind of small town in the South that had real significance in the development of the blues, and also gave me the notion for the first time of travelling down the Mississippi.
A short while later we parked up to take some pictures at one of the key reasons Clarksdale has long been a key focal point in blues folklore – ‘the Crossroads’.  Later that afternoon it was to be the subject of an entertaining conversation with Roger Stolle, owner of Cat’s Head Delta Blues and Folk in the town centre.  In the course of giving us some directions, Roger referred in a withering tone to “the so-called Crossroads”.  I laughed in response, and Jill asked why.  Between us Roger and I explained that people often attributed the significance of Clarksdale’s crossroads to being the location of Robert Johnson’s legendary midnight deal with the devil, but that this was nonsense.
“So why did we bother to stop there?” asked Jill.
“Oh, you’ve still got to go and get a picture!” laughed Roger.
And you do, because the real significance of the Crossroads is that is the intersection between Highway 61 and Highway 49, two key roads that carried many a bluesman out of the Deep South towards a new life in northern cities such as Chicago, during the Great Migration.  No, there’s not much to it, and precious little sense of mystique as you dodge traffic to get a picture of yourself taken with the tell-tale signage, but it’s still an iconic spot in blues history.
Leaving the crossroads, we carried on into town to the Delta Blues Museum, a neat and worthwhile attraction.  Founded back in 1979, it moved to its current location in the old railway depot in 1999, and has an interesting collection of blues memorabilia, and one key exhibit – the house in which Muddy Waters grew up at the Stovall Farm plantation, reconstructed from the original rough and ready timbers.  I say house, but it is the definitive shotgun shack, essentially one room, and with cracks between the planks of the walls that may well have been filled and covered with nothing more than paper. 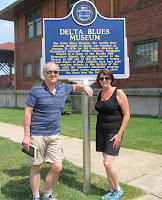 There is another exhibit that can often be seen in the museum, when it’s not touring Hard Rock Cafes around the country in order to raise money – the “Muddywood Guitar” designed by Billy Gibbons and made from a cypress timber recovered from Muddy’s cabin. It’s a relatively simple but idiosyncratic design that I’d describe as a squared-off cross between a Telecaster and a Firebird, although I imagine nobody would agree with me.  Coloured white, it features a Mississippi River graphic painted on the neck and body, because as Billy Gibbons put, painting it blue would be “too corny”.
We left as a group of day tripping Stax students were scurrying around taking the place in, and as we exited I picked up a copy of Steve Cheseborough’s excellent book Blues Travelling: The Holy Sites of Delta Blues.  Have to say I’m not that interested in the gravestones of long-dead bluesmen, but the book provides a wealth of information about towns and characters instrumental in the development of the blues.
Strolling around the town centre, it was striking how quiet it was.  Partly this was because of the blistering midsummer heat, but it was also noticeable how many retail units lay empty.  Much of the town’s economy seems to have migrated to the strip mall outside town where our hotel was located.  But sadly the place also just seems to be up against it.
We wandered into Ground Zero, the bar and venue that gets plenty of attention because it’s co-owned by Morgan Freeman, and had a quiet drink out of the sun.  It’s a good space, with a lengthy bar down one side.  But it’s also a bit odd – a refurbished and buffed up bar that features floor to ceiling graffiti, and toilet cubicles with what seem like shower curtains for doors.  Seems to me this is taking fake authenticity a bit too far, though the place does provide another focal point for the town.


Roger Stolle’s store, meanwhile, is a treasure trove of blues and folk-art artefacts, and the man himself, a noted ambassador for the blues, is more than happy to dispense directions and advice.  When we mentioned that we were hoping to take in some music that night, he immediately produced a leaflet listing the week’s gigs, and recommended us to take in Anthony “Big A” Sherrod and the Blues All-Stars, who were playing at Red’s Blues Club.  Which, as it turned out, was a good call.
You can find Part 2 of our Clarksdale visit here.
Posted by Iain Cameron at 11:08 AM