Karen Lawrence and Blue By Nature – Best Of Live

If you like Sari Schorr when she’s in R’n’B mode, then Karen Lawrence should be right up your street. Oddly, Best Of Live is actually a selection of 8 remastered tracks taken from a 1998 album titled Live At The Lake, and clocking in at a mere 34 minutes it certainly isn’t an exercise in self-indulgence. 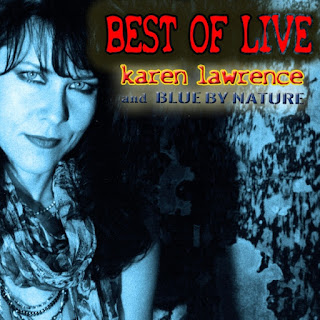 The opening ‘It’s All About You’ is symptomatic of what’s to follow, with a chugging rhythm
carried by the bass, while two guitars play off rhythm and lead against each other, and Lawrence shows off her convincing vocal chops.  Once upon a time a backing vocalist for both Aerosmith and Jeff Beck, she may be a blues bawler, but in a singing rather than shouting vein.
Her quality is also evident on the following ‘Another Day, Another Mile’ where she brings personality to the lyrics while the band demonstrate how well honed they are, the rhythm swinging on another slice of good time boogie while the guitars trade licks.  And the same is true of the later ‘I Had It All Wrong’, a tough and funky affair powered by kickass drumming, while Lawrence brings twists and turns to her delivery, fairly spitting it out at times.

Other highlights include the soul ballad ‘Fun And Games’, a torch song with the feel of, say, ‘Dark End Of The Street’, on which Lawrence does a pretty good job of conveying heartache. And there’s ‘It’s Been So Long’, which brings more variety to proceedings as it opens up slinky but gradually builds up to a steam conclusion, in a transition well worked by all concerned.
If you fancy a bit of an R’n’B party, albeit a brief one, Karen Lawrence makes for a pretty good hostess.

For anyone whose curiosity was piqued by my glowing comments about the Neil Warden track ‘The Alchemist’, when reviewing the recent Jock’s Juke Joint Volume 4 compilation, here’s some more of Mr Warden’s work for your consideration.
This four track EP from last year, recorded at Canalside Studios in Edinburgh – the pun in the title will explain itself – again shows off Warden’s ability to paint in music, as it were, or perhaps to provide the instrumental soundtrack for an unseen movie.
Opener ‘The Road Home’ is typical of what he has to offer with the singular style of his Weissenborn lap steel guitar.  One one level it’s simple, built around a repeated theme, but the overall effect is wistful, with a touch of a Celtic feel, and evoking open spaces with a sense of stillness amid the fading light of the Scottish gloaming.  It may not sound much like
Mark Knopfler’s music for Local Hero, but the mood is similar.
‘Canalslide Blues’ itself feels like it is improvised around a central theme, falteringly going in search of an enigmatic melody that’s just out of reach, while on the closing ‘Dust Bowl’ Warden’s slide playing quivers and shivers through a repeated refrain, conjuring up images of tumbleweed blowing through the desert.
In between, the seven minutes of ‘Mantra’ isn’t so gripping – meandering and less melodic, with fewer points of traction for the listener.  All in all though, Canalslide Blues is another illustration of Neil Warden’s out of the ordinary talents.

Head Honchos – Bring It On Home

Hailing from Indiana, Head Honchos are headed by the father and son twin guitar attack of Rocco Calipari Sr and Rocco Calipari Jr. And when I say attack, I mean it. These guys may give the occasional nod to funk or soul, but at the end of the day they’re in the business of blues rock.
Now, I’m partial to a bit of heads down, no nonsense boogie myself, but over the thirteen tracks on Bring It On Home the Caliparis and their gang – about whom I’m afraid I have no further information – seem to be stuck in a single, high-revving gear. Okay, maybe two gears.
‘Not For Me’ kicks off the set with hammering drums, growled staccato vocals and the two guitars going at it, with a so-so wah-wah solo, and from there on they scarcely pause for breath until, rather late in the day, closing track ‘Soul Free’ provides some relief as they swing their way around an easy-going riff.  But boy, could I have done with some more variation in style before then.
There’s maybe a hint of the Allmans about the guitar riff on ‘Come Strong’, and the drums may be toned down by the merest fraction, but it doesn’t really stray from their basic template.  ‘Next To You’ has a strutting riff and slide guitar, but Rocco Sr's vocals are pitched at the same level as on everything else, and the drum assault doesn’t let up. ‘Fire On The Bayou’ may suggest that they’re in the market for a serving of funk, but it lacks the loose-limbed subtlety of The Meters’ original, even if some organ playing introduces a touch of much-needed dynamics. By the same token ‘That Driving Beat’ reaches for horn-driven soul-funk, and is actually quite likeable, but suffers from the air of relentlessness that pervades most of what’s on offer.
A cover of ‘99½ Won’t Do’ finds things toned down half a notch, with some wonky guitar effects thrown into the mix, but you’d be hard pressed to recognise its ancestry as a Wilson Pickett hit. But bizarrely, when they then trot out ‘Going Down’, a tune that begs for a crunching approach, they don’t absolutely put the hammer down.
Don’t get me wrong, Bring It On Home isn’t a bad album, and these guys can certainly play.  But they really should learn how to turn down the heat so that not every ingredient ends up overcooked.