Get ready for a real pick'n'mix with this selection of two EPs and a single, folks!

It’s a bold PR person that sends me an EP of banjo-led stuff with hints of gypsy jazz, I can tell you.  But there are some redeeming factors at play with Dana Immanuel and her all-woman band.  For one thing, the cover reeks of Southern Gothic stylings in a way that hints at less than saccharine contents.  For another, the gypsy violin contributed by Basia Bartz is more Gogol Bordello than Stephane bleedin’ Grappelli.  And most importantly perhaps, at least there are no feckin’ ukuleles. 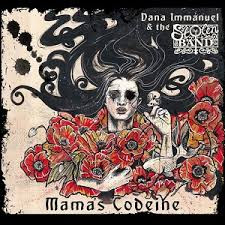 More to the point, Dana and chums actually conjure up some decent tunes on this five track offering.  'Mama's Codeine' the track is as much old-fashioned urban blues (ie the stuff that migrated north in the Twenties, way before Muddy Waters’ country blues) as it is bluegrass. It kicks off with stuttering double bass from Karen Grymm Regester under scurrying banjo from Immanuel, and towards the end they downshift into more languidly angsty terrain.
The following ‘Turn Up The Lights’ also proffers a poppy melody amidst the plinking banjo, and the scraping violin and guitar that provide useful colour to go with the good use of dynamics to convey darker moments.  Meanwhile the wonderfully titled ‘WD40 & Duct Tape’ is a still more brooding affair.  After a throbbing double bass intro it dials down the banjo, leaving room for subtly squealing guitar from Feadora Morris alongside Bartz’s violin, as well as good harmonies and interweaving backing vocals, over tapping cajòn from Hjordis Moon Badford.
‘Shady Grove’, by comparison, is a hurtling traditional hoedown vaguely redolent of Charile Daniels’ ‘The Devil Went Down To Georgia’, on which all and sundry put their foot down, giving vent to some sizzling fiddle and guitar.  Which is all pretty straightforward to the closing ‘Codeine Reprise’, which is a mere scrap of a thing despite the deranged quality of the squawking vocals.
For all that their names sound like they must have crossed paths in some cosmopolitan Greenwich Village dive, Dana Immanuel & The Stolen Band are actually based in England.  And fair play to them for avoiding the kind of tweeness I’ve encountered some English ensembles perpetrating with music in these styles.  And thank god there’s no ukuleles.

Mike Skill – Not My Business

Changing genre entirely, once or twice upon a time Mike Skill was variously lead guitarist and bassist with Detroit band The Romantics, a bunch of power pop New Wavers with a DNA similar to the likes of Blondie and The Cars.  They even had a couple of monster hit singles way back when – but not in Britain, which accounts for the fact that Skill’s name is a new one on me.
Any road, ‘Not My Business’ is his new solo single, and it’s not half bad.  Booming drums shuffle forth as the basis for ringing guitars to churn against each other in engagingly rocking fashion.  The sound is dense in a way that nods towards The Hold Steady, but less in yer face, and there’s a hint of a curled lip in the vocals that falls somewhere between Craig Finn and Jagger.  There’s a decent guitar solo that gets into some different territory, and spiky guitar breaks abounding below the vocals as it whacks you over the head with the hook for a while at the end.  It’s overlong by a good minute, but ‘Not My Business’ is quite enjoyable fare.

Now being honest, this six track EP from Edinburgh’s Jed Potts dates back to 2014.  But I only grabbed a download of it recently, so I have in fact been listening to it lately for the first time.  And besides, this is my blog, so I’ll tell you about it if I like.
Prospector is another curve ball of an offering in today’s miscellany.  Three tracks are what one might call guitar meditations.  On the opening ‘Carthage’ Potts’ steely acoustic picking rolls along hypnotically over sparse, sonorous bass notes.  A couple of tracks later ‘Trail 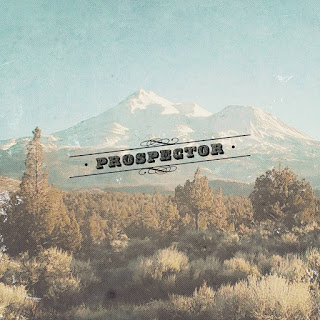 Riders’ occupies a similarly ambient space, with refrains of rippling guitar notes that shift back and forth between different themes over a low drone in the background.  At times it reminded me a bit of Steve Howe, but then again, not much.  Penultimate track ‘Shapesmith’ – a fitting title, I’d say – is again all undulating, twinkling and mesmeric guitar, counterpointed by occasional spooky bass notes.  When Mike Oldfield was sketching out Tubular Bells on an acoustic guitar, it might or might not have sounded something like this.  Probably not – but you get my drift, yeah?

In between these explorations, the title track ‘Prospector’ finds Potts setting down his guitar in favour of banjo – yes, more banjo folks, but in a different style.  It’s in a more percussively rhythmic vein as a result, but still in a drifting, cinematic kind of mode that goes with the Rocky Mountain-like vista of the cover pic.
‘Stephen & Margie’s’, by contrast, is a patient and halting bluesy rag, amusing if a bit lightweight.  And on the final track ‘I Am The Curse’ Potts delivers his only vocal on the EP, again accompanied by banjo on a brooding tune that’s like an old wagon rumbling along a rocky trail, suitable to accompany some early scenes in There Will Be Blood.
Prospector was an unusual outing for Potts, who is more usually to be found plying his trade in an electric blues setting.  But it’s interesting all the same – a palate cleanser if you like, when you’re in need of a musical change.

Prospector is available from Jed Potts’ Bandcamp page, here.
Posted by Iain Cameron at 10:57 AM

Why take the time to have a look back at Swagger , you ask?  It’s not an anniversary, is it?  Well, from some of the PR bumf I’ve seen over...