Trad-modern bluesy soul.  Contemporary old-fashioned soulful blues.  Twenty-first century Stax meets NOLA funk.  Stick your own label on it, but this debut album from Danielle Nicole is an impressive affair.
Previously Ms Nicole, aka Danielle Nicole Schnebelen of Kansas City, plied her bass and vocal skills with her two brothers in the band Trampled Under Foot.  Now stepping out on her own, she’s recruited New Orleans based guitarist/producer Anders Osborne to helm her first outing, and co-write most of the material with her.  Osborne is a new name to me but, with a workaholic resume redolent of Luther Dickinson (who also puts in an appearance
here), he’s done a top-notch job of bringing this project to fruition. 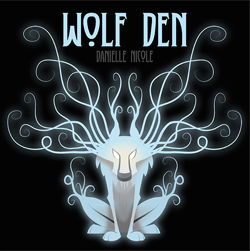 The sleek, eye-catching cover illustration sets the tone, and it’s confirmed by the title track, on which bursts of organ and a rolling bass line revolve around throbbing, heavily treated guitar lines to provide a laid-back underpinning for Nicole’s immediately impressive voice.  It’s a controlled but slick opener, with added sparkle provided by a sparse, shivering guitar solo – catch a live version on her website.
In fact guitar contributions are neat but relatively restrained throughout, with the focus more on the songs and the arrangements as a frame for Nicole’s gutsy, swooping, soulful vocals.  Whether it’s the Sixties soul of ‘How You Gonna Do Me Like That’, all handclaps and girl harmonies, the ‘La Bamba’-esque rhythms of ‘You Only Need Me When You’re Down’, or the pleading torch song of ‘Just Give Me Tonight’, she lives up to the top quality foundations that have been built for her.  And when a female singer puts you in mind of Etta James, as Nicole does on ‘Take It All’, you have to sit up and take notice.
Not all the songs may be 5-star belters, but you’ll wait in vain for a deflating dud.  There’s enough in the Big Easy vibe of ‘Easin’ Into The Night’, for example, to maintain the momentum ahead of the stomping rocker ‘Didn’t Do You No Good’, which lives up to the Zepp-ish lettering on the cover.
A cover of the Annie Peebles classic ‘I Feel Like Breaking Up Somebody’s Home’ has Nicole giving it plenty to demonstrate her connectedness to the roots of her soul sound.  ‘In My Dreams’ takes funky drum patterns, mixes in some boogie-woogie piano undertones, and shows Nicole in more playful mode, sounding like she’s having fun.
Big thumbs up to all concerned for Wolf Den.  Danielle Nicole is out of the blocks with a bang.
Posted by Iain Cameron at 1:14 PM