I first came across Joe Louis Walker when I took a blind punt on his last album, the Tom Hambridge-produced Hornet’s Nest.  It was good stuff, good enough for me to go in search of some earlier albums, namely Between A Rock And The Blues and Witness To The Blues.  The former in particular struck me as a cracker of an album.  Produced by Duke Robillard, it was maybe overlong, but it didn’t half convince me of Walker’s aptitude with a range of blues styles.
Some time later, I came across some comments about the production of Hornet’s Nest, by a reviewer on Amazon or somewhere, to the effect that Tom Hambridge could maybe do with learning that less is more, that turning things up to 11 all the time isn’t always the best 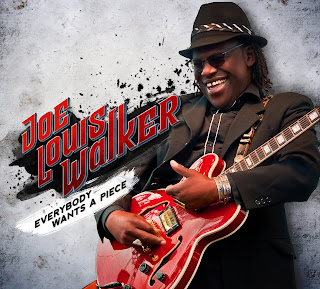 approach.  And I thought, yeah, bang on.  Hornet’s Nest is still good fun, and I love the energy of tracks like ‘Stick A Fork In Me’.  But JLW is actually better when he lays back a bit, finds the right angle for each song, gives it a bit of room to breathe.

So here we have Everybody Wants A Piece, with Paul Nelson at the helm.  And it’s back to the future, as it were, returning to the ease and range of Between A Rock And The Blues.  It may not be an out and out tour de force, but it still displays the qualities that make Walker one of the foremost blues exponents of his generation.
The opening title track sets a good standard, with its grabbing, shifting riff and scattergun lead guitar licks.  It’s a classic guitar-keyboards-bass-drums set-up, with Walker adding sporadic bursts of squealing harp, as on Taj Mahal’s ‘Do I Love Her’.
The Danny Kirwan-penned ‘One Sunny Day’, with its descending riff and guitar-vocal harmonies, may not quite match the mountainous, grinding groove of ‘If There’s A Heaven’, from Between A Rock . . . , but Walker gives it a damn good try.  Meanwhile there’s an inventive, brittle wah-wah sound on the slow instrumental ‘Gospel Blues’, which is then out-gospelled by the traditional ‘Wade In The Water’, which features more playful wah-wah soloing from Walker on the way to getting well and truly funkified.
Buddy Guy’s ‘Man Of Many Words’ gets a good workout, suggesting that Buddy had been getting a good earful of Otis Redding’s ‘Hard To Handle’. The strutting ‘Young Girl Blues' features neat boogie-woogie piano from Phillip Young, who contributes a variety of keyboard sounds throughout, before they close proceedings with the shuffling ’35 Years Old’, on which Walker makes good with both serpentine slide guitar and high-pitched harp.
Across the 11 tracks on show here Joe Louis Walker again covers a lot of blues bases, and does it with class and conviction.  He may not quite be the heavy hitter that Buddy Guy is in the blues pecking order, but Everybody Wants A Piece demonstrates that he continues to be one of the best electric bluesmen of his generation.