There’s this Future Juke Festival coming up at a handful of venues in London in the next week, in case you hadn’t noticed.  So I thought I’d pitch in with some thoughts on a few of the acts I’ve tripped over previously.  Well why not?

Eli “Paperboy” Reed could well be one of the highlights of the week at the 100 Club on 4 June, judging by the urgent, sometimes gospel-inflected, Sixties-style soul of his 2016 album My Way Home.  If Samantha Fish took Detroit R’n’B mini-epics of love and rejection, and re-tooled them for the 21stcentury on her album Chills & Fever, Reed’s style is a
throwback to the old days, with a reverb-drenched production where you can practically hear scratches on 45rpm vinyl.

The energy levels are intense on the likes of ‘Cut Ya Down’, but he also pulls off sweetly Sam Cooke-ish soul on both ‘Tomorrow’s Not Promised’ and the title track, with its gospel choir like backing vocals.  It’s worth bearing in mind that in addition to spending a year or so imbibing the blues in Clarksdale, Bostonian Reed played organ and piano in a Chicago church alongside noted soul singer Mitty Collier, so he knows his onions, and it’s apparent here.
‘The Strangest Thing’ is a rock’n’rollin’ affair, while ‘A Few More Days’ has a dash of funk with its cocky guitar riffing.  And throughout it all Reed delivers vocals that are raw and convincing, with controlled melisma – and it’s not all boy/girl, moon/June soul subject matter by the way.
There are people who rave about the soul of our own James Hunter Six, but frankly they’re smooth operaters compared to Reed’s fervent reawakening of the Sixties.

One of the other main events is the outing at Dingwall’s on 1 June by Californian Grammy Award winner Fantastic Negrito, and you can find a review of his upcoming third record Please Don’t Be Dead here – with links to coverage of his two previous efforts.  But he’s also supported by British trio Miraculous Mule, so what are they all about?
Well, I’m not yet acquainted with their latest album Two Tonne Testimony.  But back in 2015 I came across their back-to-basics reading of ‘In My Time Of Dying’ on a covermount tribute CD to Physical Graffiti produced by Mojo magazine. On the strength of that I got hold of a couple of their albums, Blues Uzi and Deep Fried, which showed them offering a few
different modes of bluesiness.

First and foremost perhaps, they have a penchant for traditional spirituals and folk songs of the kind you might expect from Blind Boys Of Alabama, but often with a British sensibility that’s sometimes modern and edgy, sometimes dead straight. So they do a delightful version of ‘Wayfaring Stranger’ that sounds like it’s straight out of the British Blues Boom by someone like The Animals.
Or there’s their minimalist take on the 19thcentury hymn ‘I Know I’ve Been Changed’ – also recorded by Aaron Neville – where the lead vocal is backed by little more than low key guitar and choral backing voices, with sporadic handclaps – a template they exploit more than a little.  But they might also produce something like ‘Satisfied’, with its guitar buzzing like a jarful of wasps behind the favoured device of a hypnotically repetitive, work song-like vocal refrain.
Then again, stuff like ‘Highway Song’ offers a blissed-out wah-wah trip that’s all Swinging Sixties London, whether in the hands of envelope-pushing Brits or Hendrix, who’s also echoed in the ‘Crosstown Traffic’ style riffing they bring to the gospel of ‘I’m A Soldier’ (aka 'Soldier For Jesus', a song often played to great effect by electric blues icon Joe Louis Walker). Or in another vein altogether you might get some country blues with clanking percussion a la Lincoln Durham, as on ‘Blues Uzi’.

On 31 May Brighton’s Mudlow are part of a three-part bill at The Islington. Their retrospective collection Waiting For The Tide To Rise opens with ‘Down In The Snow’, which features a guttural, ‘Peter Gunn’ style riff accompanied by swelling horns, gruff barked 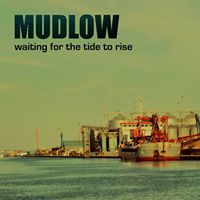 vocals and a down to earth guitar solo from Tobias Mudlow, and a tasteful trumpet break.  But for the most part it’s a three-piece affair, with a few interjections of harp and horns.

Sometimes this means down to earth grunginess on the likes of ‘Drunken Turkey’, with the howling vocals sounding like a herniated Screaming Jay Hawkins, or a North Mississippi vibe on ‘So Long Lee’ with its rolling guitar line.  Often is dark, contemplative Americana, maybe haunting as on ‘The Jester’ with its twanging, spaced out guitar notes and tickled piano. Some of this, to be honest, can start to seem a bit earnest and sombre, though Tobias does turn his hand to a good Tom Waits-like vocal along the way.
Personally I like them best on the likes of ‘Stubb’s Yard’, which has a jaunty Delta simplicity to it that’s redolent of Frank Frost and Sam Carr.  Or on ‘Codename: Toad’, which has an air of Feelgood but more primitive – although they take their foot off the pedal a bit, rather than ramming it home in the way Wilko, Lee and co would have done.  Hopefully they’ll give stuff like this a bit more welly live.

But what do I know? There are other acts out there during Future Juke, billed as a Festival of 21stCentury blues.  Go see, go hear!

How do you solve a problem like Van Morrison?  Don't get me wrong, I come not to bury Van, but to praise him.  The thing is, he is such ...